Bloopers From How To Make A Radiator Cover

Bloopers from ‘How To Make A Radiator Cover’

These are the bloopers from filming ‘How To Make Radiator Cover’. If you can’t see the video please click here.

I’d like to start by saying that no small children were harmed in the making of this video! 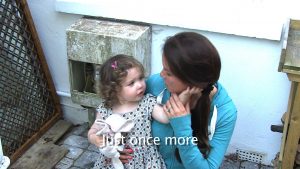 It may also look like my daughter wasn’t enjoying herself, but watch out for that wry smile she gives showing that actually she just enjoys saying “no” to her mummy.

The interesting thing about this particular video was that the DIY side was the smooth bit. Doug the builder was on hand to make sure everything went swimmingly. Mainly because he was kindly lending me his equipment!

Meanwhile my toddler Bonnie, who clearly has a real penchant for snails, was having none of it.

What I didn’t include were the expletives when grandparents didn’t honour the sacred rule of being on set and decided to shout out before the end of the only perfect take I managed to get.

If they weren’t such a cheap childcare option they’d be out on their ears – trust me!

Not so comedy duo

I feel her comedic timing needs some work, but there is hope…

If you actually like the idea of making a radiator cover, or indeed a gas meter cover, as is demonstrated, here’s the more polished version.

If actually you just revel in watching us getting it wrong, you may enjoy this earlier video. I think it’s safe to say it’s clear who the boss is in this mother daughter relationship.

I only have myself to blame when I am not satisfied with the stress of weekly DIY projects, I have to throw a small being and filming into the mix!