How To Put Up A Shelf And Dress It!

How to put up a shelf and dress it

This is my post on how to put up a shelf. If you can’t see the video click here.

How to fill a blank space 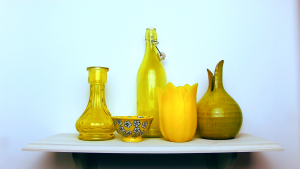 A blank wall doesn’t need expensive artwork. A great way to fill it can be with a strategically placed shelf to hold cacti – very on trend don’t you know!

See, being left on the shelf can be very chic…

It’s fairly straightforward to put up a shelf with brackets, but make sure you do it right if you want it to stay put. 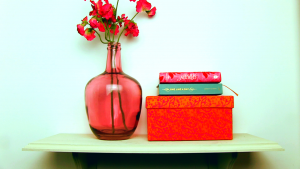 One thing you need to make sure is that you’re using the right rawlplugs or plasterboard fixings.

This means knowing what you’re screwing into – brick, concrete, old plaster or plasterboard. If it’s old plaster it needs to be in good condition!

If you want a painted finish, it’s easier to do this first, or at least before you fix it to the wall. You can then neaten up by filling and painting over screws at the end, if necessary. 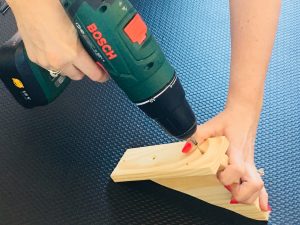 It’s worth putting down a dust sheet as there is likely to be a lot of brick and plaster dust.

If the wall plates don’t have ready-made holes, drill three for eventually securing to the wall. You will need two screws at the top and one at the bottom of each wall plate.

Fix the brackets to the wall plates with screws. Two brackets should be sufficient unless it’s a long shelf. 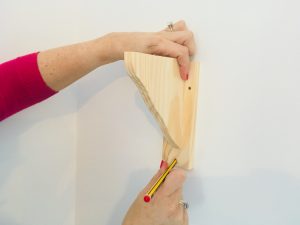 Before deciding on a wall position, check there are no electricity wires or pipework behind the plaster using a detector.

As a general rule, if there’s a electrical socket on the wall there is going to be a cable going up the wall to the ceiling. The same applies with pipework in bathrooms.

Hold the brackets in position (for a standard small shelf this will be about 400mm apart, or 50mm in from each end). Draw through the previously made holes using a spirit level to make sure the shelf will be level. 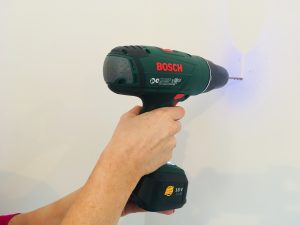 Drill holes where the wall is marked and push in the rawlplugs.

Here’s a little tip for fixing to plaster or brick walls. When you have drilled the hole for the plug, push the plug into the hole. Put the screw you will use into the plug and tap with a hammer to make the plug go into the wall just deeper than the plaster.

You will get a better fixing and this way you won’t split the plaster off the wall.

If you are fixing into plasterboard either find the studs in the wall or use a spit driva. This is a clever fixing made for plasterboard. Normal rawlplugs are unlikely to work. 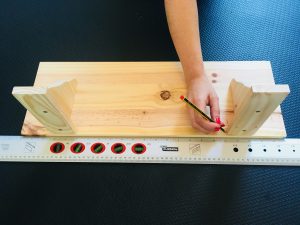 Attach the brackets to the shelf using nails, glue or screws.

Screw the brackets, with the shelf already fixed, into the rawlplugs and embellish!

And that’s how to put up a shelf.

The great thing about filling a blank canvas with a shelf is that you can experiment with different colours, styles and objects. 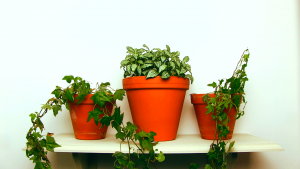 You can be minimalist or go bonkers and it’s quick and inexpensive when you change your mind a few months later!

Check out my video for some ideas. Then once you’ve done yours send me a ‘shelfie’!

Another way to fill a blank wall is with a large mirror – why not upcycle one to match your room? Here’s my guide.