My House Renovation – Before And After Fest

If you can’t see this video go to my Home Genie channel instead.

The house renovation that inspired this blog

I thought I’d dedicate this week’s post to the house renovation that inspired me to launch this blog in the first place.

I have renovated a number of places now and can’t seem to tear myself away from Victorian properties, despite how much trouble they can be.

The current one, which I am just coming to the end of, is definitely the largest I’ll ever want to attempt…

…actually I’ve just remembered the next property I have my eye on – that one’s for a future blog though as it’s not even on the market yet!

It does feel a little like an addiction, particularly as I just find the ‘finishing fix’ so satisfying.

I think it must be a little like childbirth as it’s almost like you forget the extent of pain you go through each time. When you get to a stage where the house is up and walking on it’s own, the bedroom is allowing you to sleep well at night and the hallway greets you with a big hug when you come home from work you think – ooh it might be nice to do it again.

Rereading that I realise that it sounds like I’ll come to a stage where I want to sell my first child before I move onto another…no comment.

So anyway, welcome to my current, almost grown-up baby. There are certainly finishing touches needed, which I’ll be documenting along the way, but at least I feel like it’s now in a presentable state! 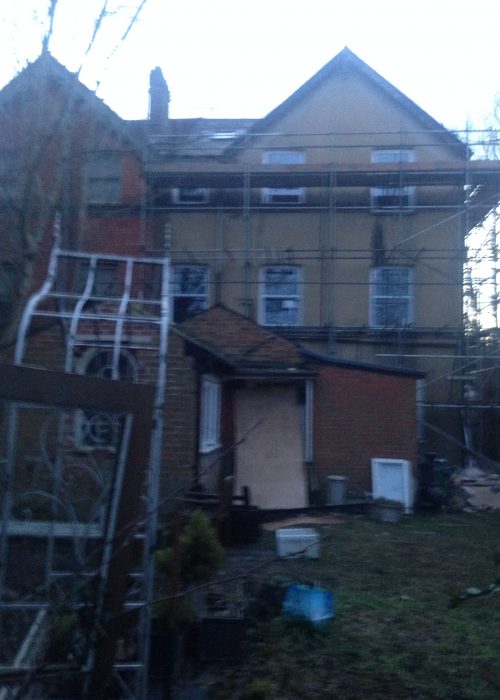 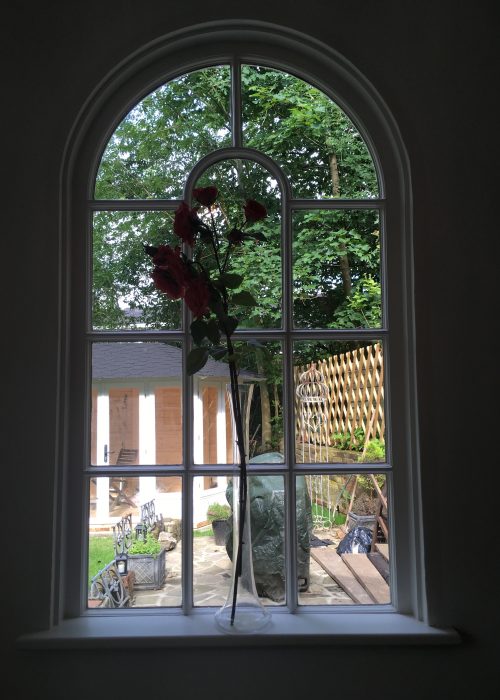 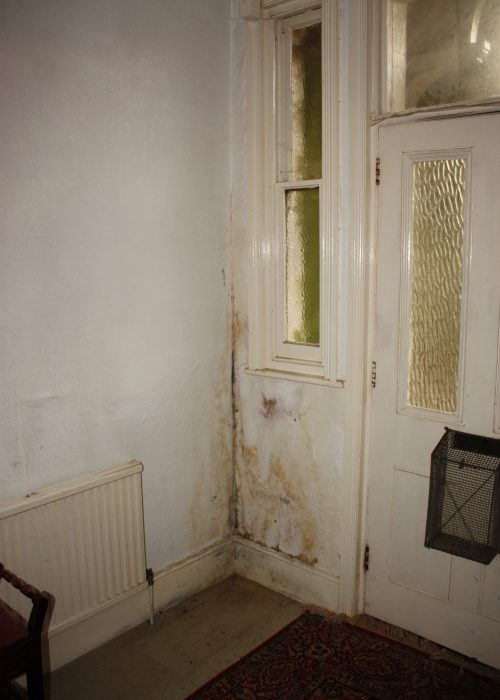 Why buy this house? Why indeed!

Being sold under the cloud of a divorce the house felt quite sad. A family had bought it nearly 20 years ago from an elderly lady, who had also lived there for 20 years – I can’t seem to stay somewhere for more than three years, so maybe here is where the chain will be broken…

I think they had the same intention as me, to restore it to its former beauty as it was already in a state of disrepair back then. It seems that time and money had got the better of them, and brought them to spending two years without any heating. Shudder.

The biggest expense was to replace every single window except one – which I love for obvious reasons – and it also happened to be the only one that wasn’t broken or coming away from the wall.

There were 30 of them so it must have been a little drafty you might say.

I’ll be taking you through the closer details of the renovation in future weeks, but here’s a general walk-through, just to whet your appetite.

The hallway took my breath away when I first turned up at the house, not least because of the musty smell. Even in its poor state it was standing proudly, like an old war veteran who knows what he once was.

Some replastering was needed, although throughout the house we have really tried to only do this where necessary.

Dulux Timeless paint brightened it up as did the chandelier we found at a flea market in Lille, befitting of the hallway’s grand beginnings. 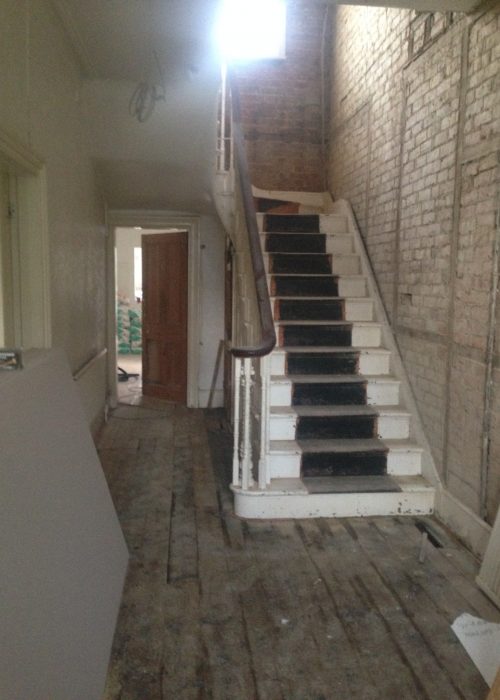 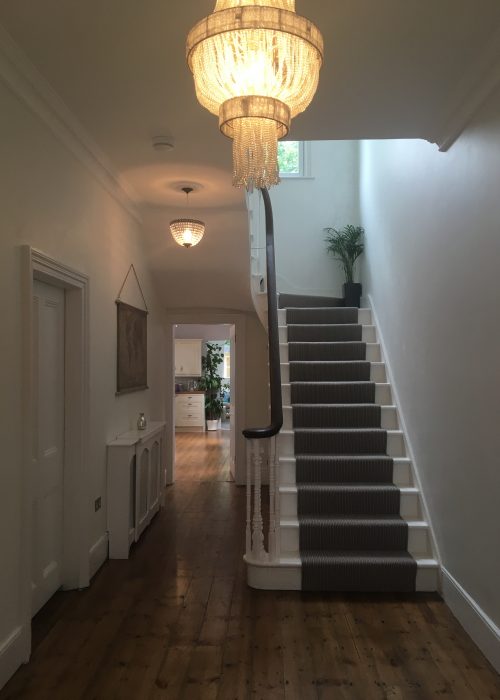 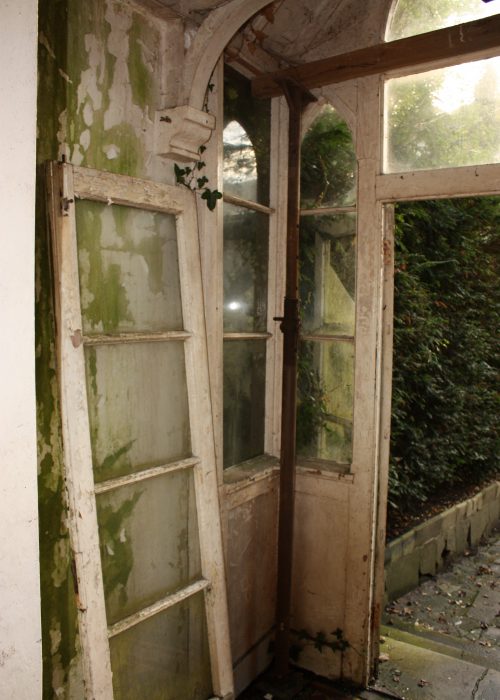 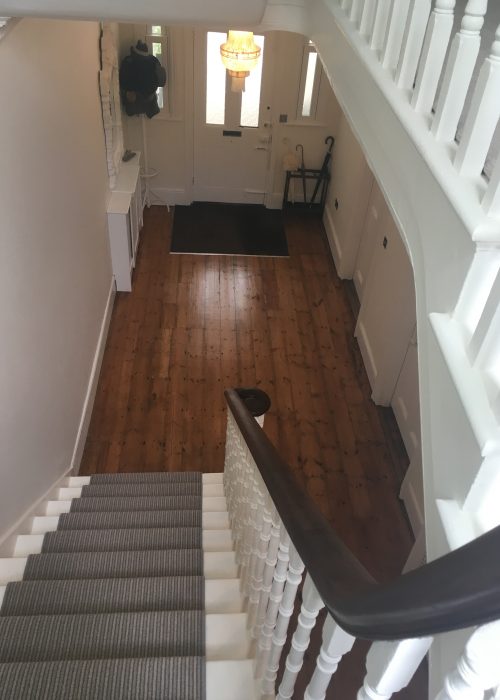 I have to point out the spindles (all 84 of them) were repainted in white eggshell and I renovated the handrail which had been lazily painted underneath.

This was painstaking work, chipping away at an excruciating angle for many evenings, but worth every aching muscle….

Some damp work was needed as the porch roof had allowed water to leak onto one of the walls. The old carpet was removed and the beautiful original floorboards restored, thanks to the amazing guys at Bare Floors.

This was a pure renovation as there was no need to extend, but we did decide to reconfigure the kitchen.

The house actually used to be a school and had been extended in its time. For this reason there was a large room off a relatively small kitchen, which needed replacing anyway, so we decided to turn this unused space into a larger kitchen and family room, gaining the rather middle class snug area (which actually we use more than the lounge now!). 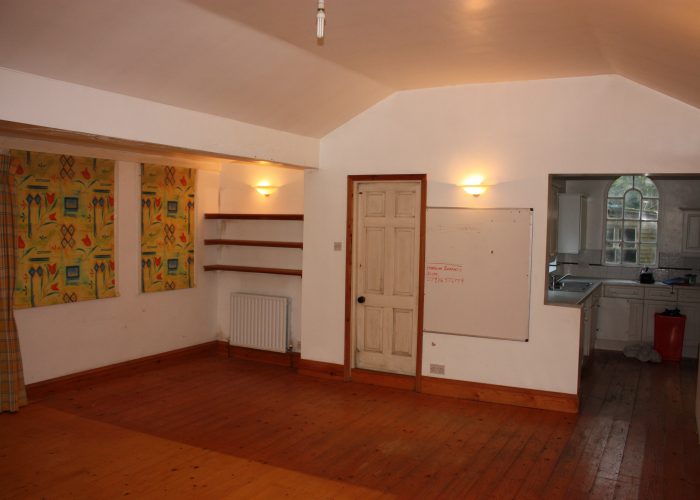 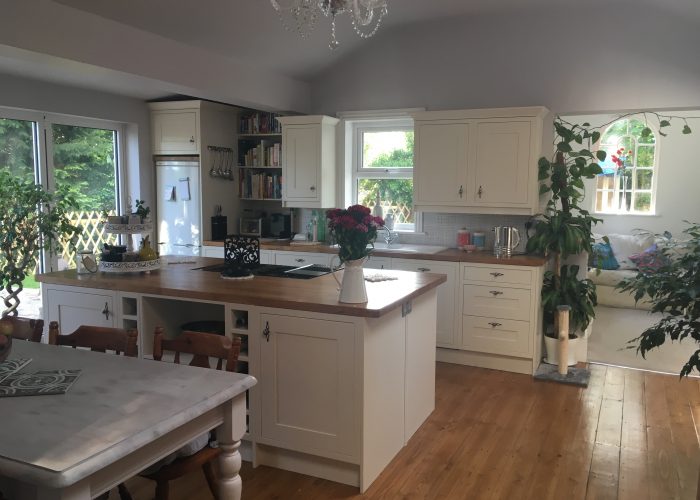 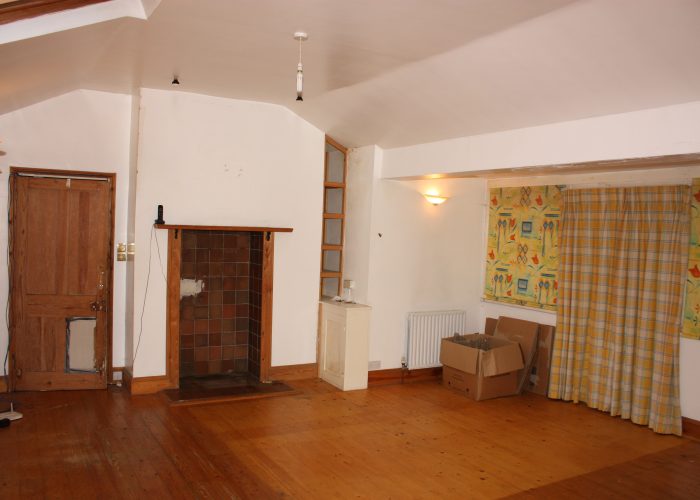 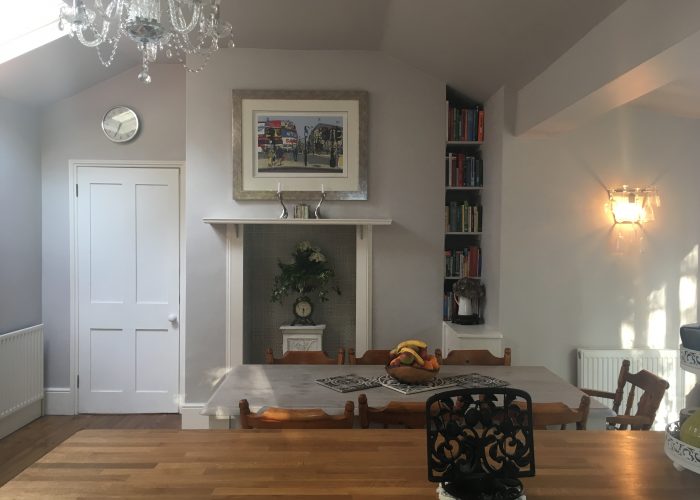 We added a couple of skylights and replaced one wall with bifolds to let in more light. I always decorate a house with a view to selling so chose a solid wood kitchen but just in a neutral bone. 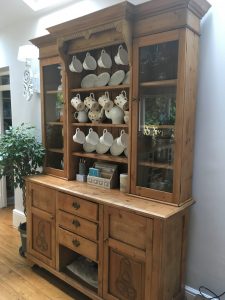 To give the room some character, but in a way a new owner could change easily if they weren’t keen, the walls were painted grey (if interested I can give you the code for this grey as it is the result of much experimentation of greys which can quite often come out too dark or as pink or violet if you’re not careful) and added some Moroccan style tiles. I am so OCD I actually lay these tiles out in the exact pattern I wanted for the poor, terrified tiler!

I’m not sure how old the Welsh dresser is but I bought it second-hand from Dovetails and to me it’s the character of the kitchen.

The lounge was blue in mood and colour, but generally needed very little work a part from the ceiling.

The builder was desperate to make his life easier and was convinced (sorry I bang on about this a lot!) that we should take it down – Victorian cornice and all – and plasterboard the lot. 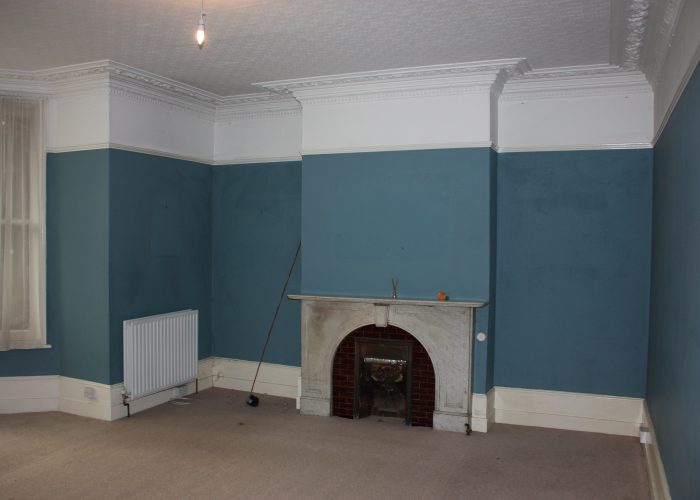 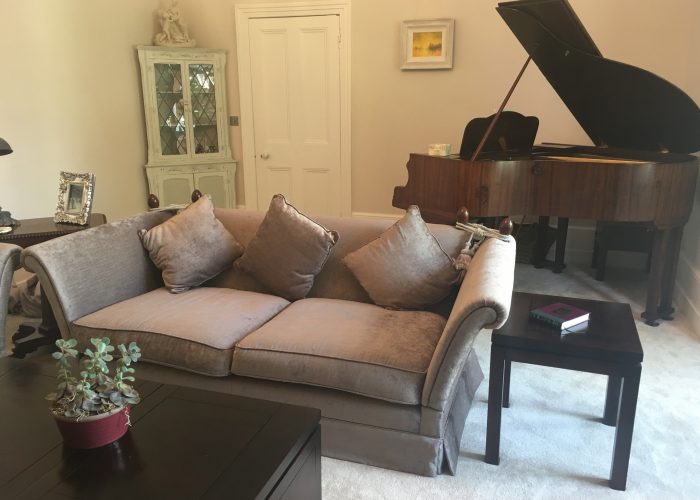 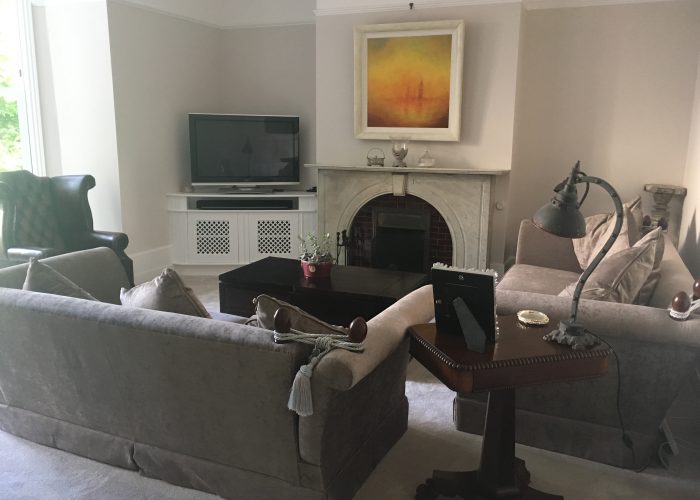 I’m pretty stubborn, not always the best quality, but I feel quite protective about these things. Fortunately our wise decorator PJ was similarly sympathetic and spent some back-breaking days removing pub stylee anaglypta and securing the ceilings. He also repaired some of the broken cornice by hand.

I love you and always will for this PJ. It’s worth mentioning he also taught me a lot about painting and shared his pearls of wisdom from his incredibly interesting life. He was once nearly on Top of the Pops you know! 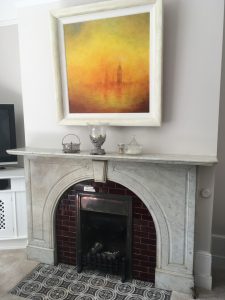 I’ve had to tile the fireplace hearth as it was missing, but this gave me a great opportunity to add my own touch to the room.

The marble needs cleaning as some cretin painted it once, but I’m saving that job for next winter during which I may be able to watch this new series I’ve heard is really good called Game of Thrones?

Apart from the fireplace it’s a little bland at the moment, but I have plans…

The bathroom wasn’t really a bathroom but more of a bath in the hallway. There were two of these, one on each floor, and no shower.

Imagine taking a bath in the middle of winter, with broken windows and no heating! 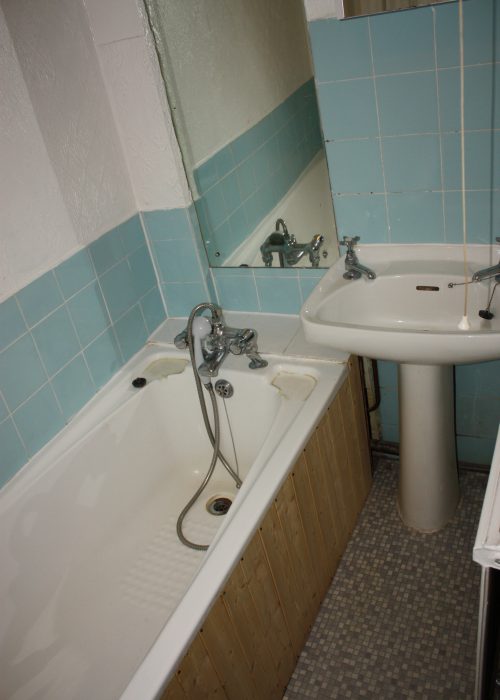 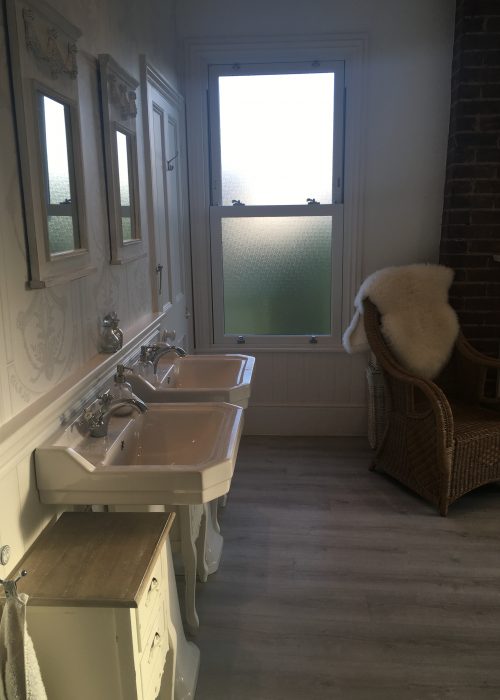 So I love a bathroom. To me, starting the day in a decent one puts a spring in your step. Luckily, this existing bath in the hallway was next to an excessively long bedroom with two windows.

After some jiggery pokery of working out how to fit a bath, shower and his n’ hers basins around a fireplace and windows we were able to cut the bedroom down to a decent double-bedder and create a dreamy bathroom. 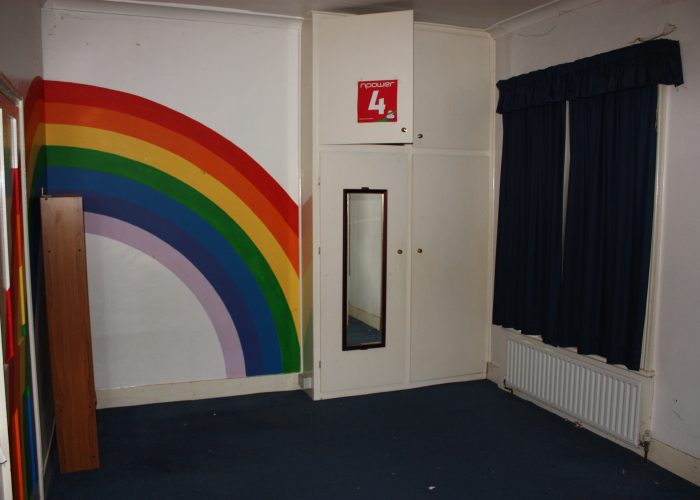 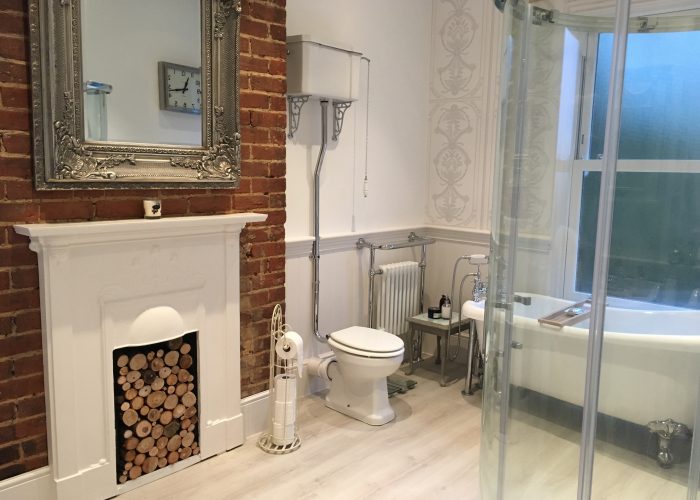 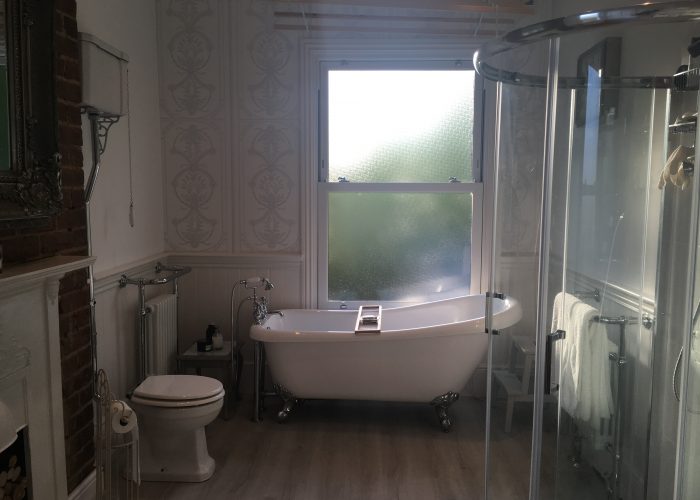 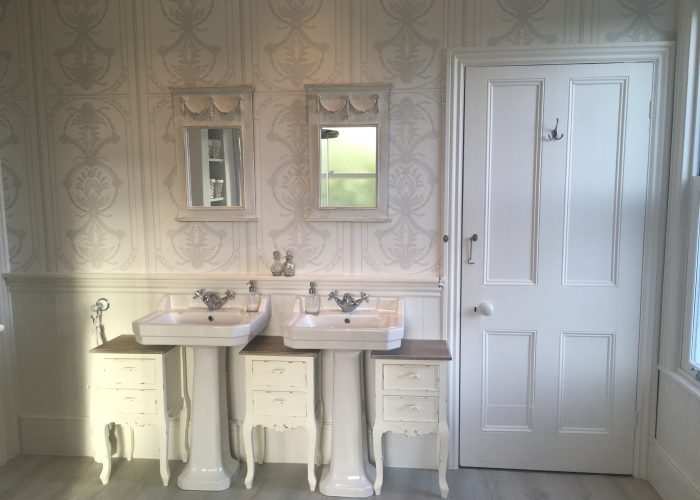 Please note the chimney-breast was exposed by yours truly and step dad Alan, usually in the evening by mobile phone light as there were no electrics.

This was what I was doing after putting a two month old baby down to sleep in the evening so if this house hasn’t been a labour of love I’m not sure what is!

By the way, we also had a door made to go through to the bedroom – more of a jack and jill situation than an ensuite, but works well.

The bedroom had yellow walls and a dark blue carpet. This is a pretty large room and seeing as my husband is very much into equality when it comes to wardrobe space we may actually be able to live in harmony.

The bed – which was a wedding present from my nanna – is a big factor in why we ended up buying this house as we could find few places that would fit it comfortably. 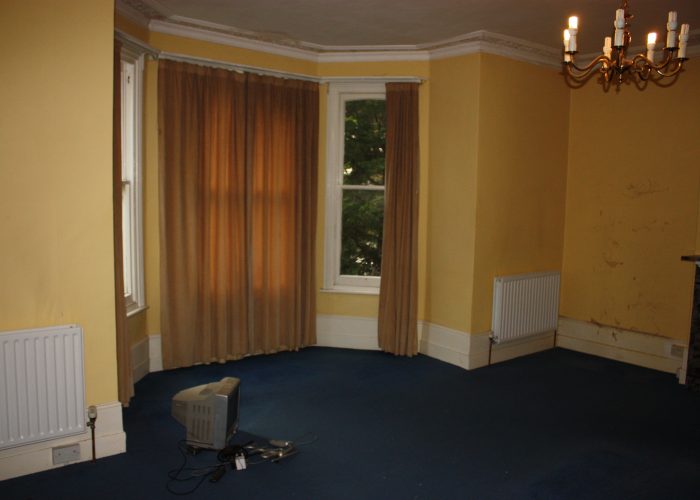 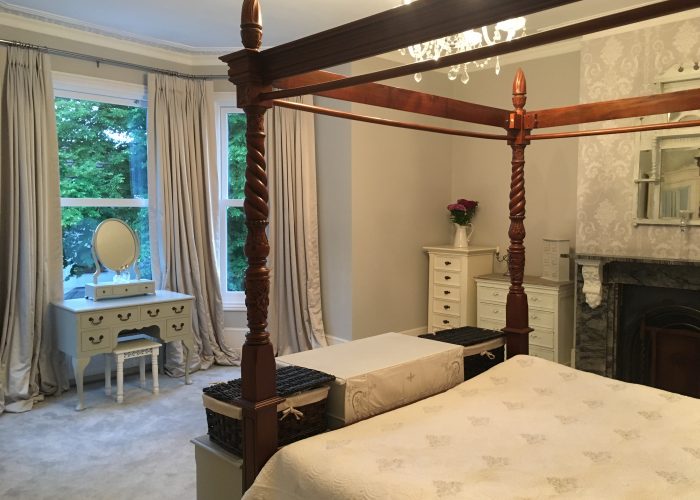 The white and grey theme is so tranquil – you may have noticed I’m a big fan of grey – but to me it really fits the house. I’ll take you through the up-cycled furniture in future posts.

The other rooms – watch this space…

There are also a further six bedrooms to show you and also a dining room, but the latter is currently an elegantly decorated workshop for me and my tools and the rooms aren’t quite finished, but give me plenty of fodder for future inserts!

By the way if you want to see my collection of mirrors and how I up-cycle them you might want to take a look at No Smoke and 20 Mirrors.